The Weeknd | After Hours Til Dawn Tour 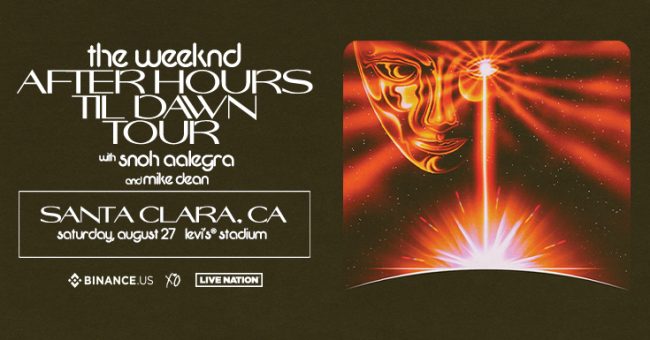 The Weeknd to perform at Levi’s® Stadium on August 27!

The After Hours Til Dawn stadium tour will kick off up north in The Weeknd’s hometown of Toronto on Friday, July 8th at the Rogers Centre, with stops at iconic U.S. stadiums including Levi’s® Stadium in Santa Clara, California on Saturday, August 27th, and more, before wrapping Friday, September 2nd at SoFi Stadium in Los Angeles, California. The tour is produced by Live Nation. This is the first leg of The Weeknd’s massive world tour, with additional dates in Mexico, South America, Asia, Australia, New Zealand, Europe, Africa & Middle East to be announced soon.

Tickets for the North American dates go on sale beginning Thursday, March 10th at 10am local time via TheWeeknd.com/tour.