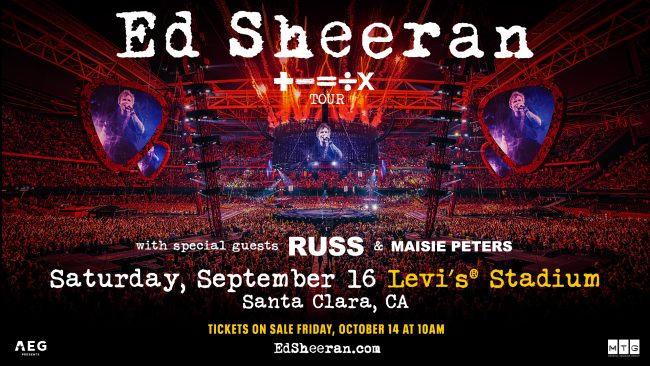 Ed Sheeran with special guests Russ and Maisie Peters are headed to Levi’s® Stadium on September 16, 2023!

Multiple GRAMMY® Award-winning, global superstar Ed Sheeran has announced details for the North American leg of his “+ – = ÷ x Tour” (pronounced “The Mathematics Tour”), hitting stadiums across the continent for the first time since his history-making “Divide Tour” in 2018, which officially became the most-attended and highest-grossing tour of all time by its completion. Dates begin on May 6th at AT&T Stadium in Arlington, TX, before wrapping up on September 23rd at SoFi Stadium in Inglewood, CA (see attached itinerary). Main support on a majority of the dates comes from multi-platinum artist Khalid (May 6th-September 2nd) with rapper/singer-songwriter Russ rounding out the tour (September 9th-23rd); Dylan, Cat Burns, Maisie Peters, and Rosa Linn alternate as first of three. Sheeran recently wrapped the UK/European leg of the “+ – = ÷ x Tour,” performing in front of over 3 million people in 6 months and highlighted by a five-night stand at London’s Wembley Stadium.

To ensure that his fans have the best chance at getting tickets, Ed Sheeran is partnering with Ticketmaster to use the #VerifiedFan system. Registration opened Monday, October 3rd at 7AM PT and closes on Sunday, October 9 at 7PM PT. Fans can register HERE. The Verified Fan Presale is set to begin on Wednesday, October 12 at 10AM and run through Thursday, October 13 10PM (all times local). The general public on-sales are Friday, October 14 at 10AM.