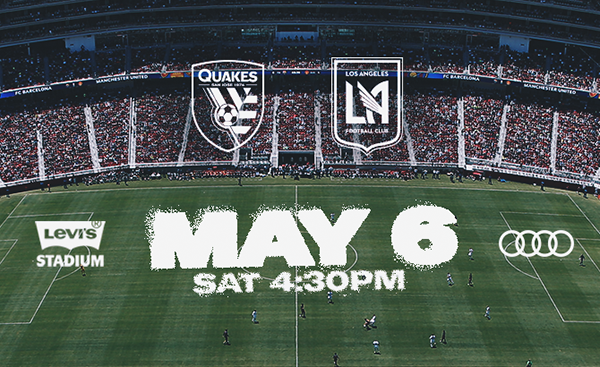 Quakes to play LAFC at Levi’s Stadium®  on May 6th!

The San Jose Earthquakes have unveiled their full schedule for the 2023 Major League Soccer season. The schedule is headlined by rivalry matches with the LA Galaxy and Los Angeles Football Club at Stanford Stadium and Levi’s Stadium® , respectively, as well as the inaugural Leagues Cup which features every club from MLS and Mexico’s Liga MX. San Jose will play their two SoCal rivals three times each, with a second showdown against the Galaxy taking place at PayPal Park.

The 2023 season begins with a road match at Atlanta United FC on Saturday, Feb. 25 (4:30 p.m. PT) before the Quakes’ home opener vs. Vancouver Whitecaps FC on Saturday, March 4 (7:30 p.m. PT). The Earthquakes will host a 20-year celebration for the 2003 MLS Cup championship squad that night, with more than 20 former members of the team scheduled to attend, including Dwayne De Rosario, Jeff Agoos, Brian Ching, Ian Russell, Ramiro Corrales, Ronnie Ekelund, Richard Mulrooney, Todd Dunivant, and Troy Dayak, among others. Ten thousand fans in attendance will receive a 2003 replica shersey.

New to the schedule in 2023 is a showdown with defending MLS Cup champions LAFC at Levi’s Stadium®  on Saturday, May 6 (4:30 p.m. PT). It marks the team’s first regular season game at Levi’s Stadium®  since Aug. 2, 2014, a 1-0 win over Seattle Sounders FC in the first sporting event in its history. Levi’s Stadium®  is one of 11 U.S.-based venues set to host matches during the 2026 FIFA World Cup and has a capacity of more than 70,000. The match will feature the Bay Area’s largest Cinco de Mayo celebration, including a pregame fan festival, a halftime musical performance, pregame celebrity appearances, and appearances by former Mexico National Team players. More information about the event will be announced later.

Suite rentals are available for this concert. To learn more about suite purchases, please click here or email Suites@49ers.com. Sign up below to find out more.