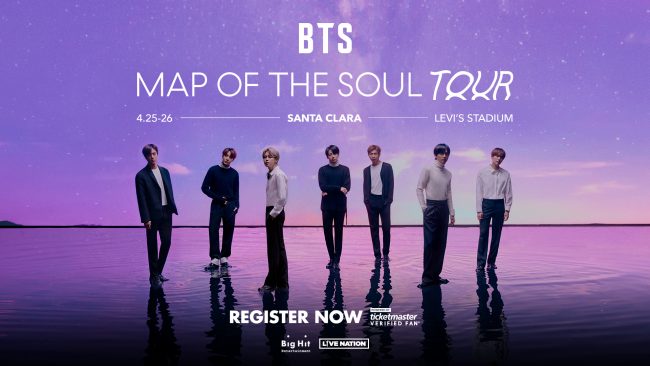 Due to public health concerns regarding the spread of COVID-19, the BTS Map of the Soul Tour Concert scheduled for Levi’s® Stadium on Sunday, April 26, has been postponed.

Today global superstars BTS announce their return to the U.S. and Europe with their MAP OF THE SOUL TOUR. The outing follows last year’s massive BTS WORLD TOUR ‘LOVE YOURSELF: SPEAK YOURSELF‘ which sold out 6 stadium shows in the U.S. in minutes.

MAP OF THE SOUL TOUR will be their biggest North American tour ever and kicks off with two shows in Santa Clara at Levi’s Stadium on Saturday, April 25th and Sunday, April 26th. The outing will also travel to Los Angeles, Dallas, Orlando, Atlanta, New Jersey, Washington D.C., and Toronto before wrapping on June 6th in Chicago. Please see full itinerary below.

BTS, an acronym of Bangtan Sonyeondan or “Beyond the Scene”, is a South Korean boyband that has been capturing the hearts of millions of fans globally since their debut in June 2013. The members of BTS are RM, Jin, SUGA, j-hope, Jimin, V and Jung Kook. Gaining recognition from their authentic, self-produced music and top-notch performances to the way they interact with their fans, the band has established themselves as global superstars breaking countless world records. While imparting a positive influence through activities such as the LOVE MYSELF campaign and the UN ‘Speak Yourself’ speech, BTS has mobilized millions of fans across the world (named ARMY), topped prominent music charts, sold out worldwide tours including stadiums and has been named as one of TIME 100: The Most Influential People of 2019. The band has also been recognized with numerous prestigious awards like the Billboard Music Awards and American Music Awards.

Founded in February 2005 in South Korea by CEO and Producer Bang Si-Hyuk, Big Hit Entertainment’s core business focuses on music production, artist management and publishing. Big Hit’s business ventures incorporate and develop a range of content produced from top-notch artists’ IP, including global superstars BTS and its newest addition TOMORROW X TOGETHER. With its mission of ‘Music & Artist for Healing’, Big Hit strives to impart a positive influence through content while providing comfort and inspiration to music fans worldwide.