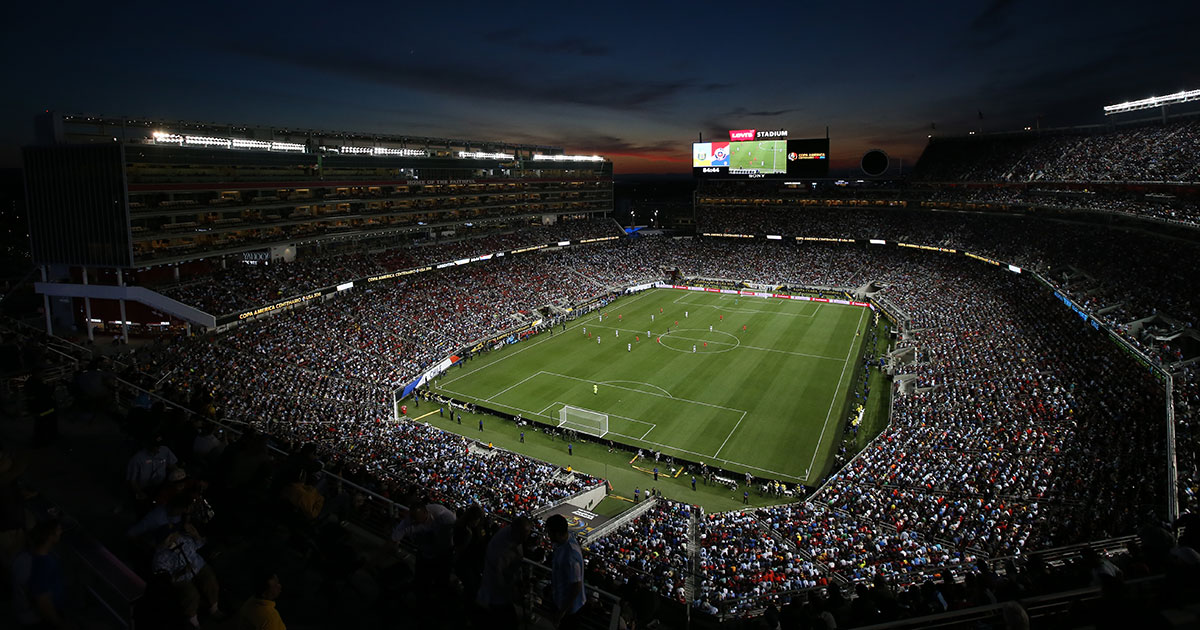 Bay Area Host Committee, Group of Corporate and Political Leaders Come Together to Reaffirm the Bay Area’s Bid for Levi’s® Stadium to be a 2026 FIFA World Cup™ Host Venue in Advance of FIFA Delegation Visit

SANTA CLARA, CA — On October 29th and 30th, the Bay Area Host Committee will welcome FIFA officials to Levi’s® Stadium for a site visit as a part of the Bay Area’s bid to be a host city for the 2026 FIFA World Cup™. The 49ers will be joined by a coalition of Bay Area businesses (Airbnb, Coinbase, Cruise, Google, Levi’s, Lyft, Peet’s Coffee, Salesforce, SAP, and Visa) and political leaders (including Mayor London Breed, Mayor Sam Liccardo, and Mayor Libby Schaaf) to showcase the Bay Area to FIFA officials, highlight the area’s rich history of soccer, and make the case for the Bay Area as a natural host for one of the largest sporting events in the world.

The 2026 FIFA World Cup™ will be hosted across 16 cities in the United States, Mexico, and Canada. 22 cities are currently under consideration across the three countries and host cities are expected to be announced in early 2022. As part of their visit, FIFA officials will tour Levi’s® Stadium, assessing both the Stadium’s capabilities to be a host venue as well as the region’s wider suitability.

“The 49ers have been proud stewards of the Bay Area for decades, and we’ve seen time after time how one of the most diverse regions in the world gets excited about major sporting events. The excitement and community spirit unique to the Bay Area has been directed at soccer for generations, going back to the FIFA World Cup matches the area hosted in 1994 and 1999, which were a huge success,” shared Al Guido, 49ers President and Bay Area 2026 Board President. “There’s no doubt in my mind the 2026 FIFA World Cup would inspire an even bigger response, and we’re honored to be leading the Bay Area’s bid to host this exciting, crowd-drawing event. Levi’s Stadium is a world-class venue that has shown it’s capable of hosting premier national and global events, and we would be a fantastic stage for the 2026 FIFA World Cup.”

The Bay Area boasts a rich history of soccer passion and development. In 1994, the Bay Area hosted several FIFA World Cup™ matches, and the 1999 FIFA Women’s World Cup™ semi-final took place at Stanford University. Since then, a number of international soccer events in the Bay Area have drawn hundreds of thousands of fans. These major competitions, as well as some of the most competitive youth leagues and elite college soccer powerhouses like the Santa Clara University women’s team, are a reflection of the long history of hosting the world’s game in the region.

“The South Bay has a rich history in hosting international soccer and boasts the world-class venues needed to get the job done in 2026. We also have the infrastructure and passion needed to leverage the economic boost the event would bring to the area for the long term development of soccer. I look forward to meeting with FIFA officials this month and hope to be there in the stands at Levi’s Stadium in 2026!” shared Sam Liccardo, Mayor of San Jose.

“Sport can bring out the best in us. It inspires tomorrow’s stars and offers a community the chance to be proud and show off its best to the world” said Mayor of Oakland Libby Schaaf.  “Oakland is thrilled to support the 2026 bid and we look forward to showing FIFA why the Bay Area is uniquely positioned to not only host world-class soccer, but also to use this moment to realize the social benefits that hosting the FIFA World Cup can achieve.”

“Hosting the FIFA World Cup would be an honor for the Bay Area and something I believe would benefit our community for years to come. San Francisco has long stood as an open city and top international destination, playing host to the events and moments that inspire the leaders of tomorrow. We’re ready for 2026” said London Breed, Mayor of San Francisco.

The global reach of soccer and its presence in the Bay Area is a natural extension of the international and diverse communities in the region. San Francisco has transformed from a cosmopolitan port city into its current position as a global technology and innovation leader. Through these developments, the San Francisco Bay Area has retained its identity as a region that’s open to the world and plays host to the events, people, and ideas that push culture forward.

With Levi’s® Stadium, the Bay Area offers a modern, world-class venue with an already rich history in hosting elite domestic and international competitions. In the past six years alone, Levi’s® Stadium has hosted matches for the 2016 Copa América Centenario, 2017 Concacaf Gold Cup, and multiple International Champions Cups. Levi’s® Stadium is also a distinguished venue for other sports, and hosted the NFL’s Super Bowl 50 in 2016. In addition to its presence on the international stage, Levi’s® Stadium remains a venue deeply rooted in its local community, recently converting into California’s largest mass vaccination site, administering over 350,000 doses of COVID-19 vaccines.

Bay Area businesses and employers are supporting the bid:

“The World Cup is an incredible connecting point that brings people of all backgrounds together around a love of the game. We’re excited to partner with the Bay Area host committee and join the millions of local fans who would love nothing more than to cheer for their team in our own backyard!” said John Zimmer, President and Co-Founder of Lyft.

“At Salesforce, we’re incredibly excited to partner with the Bay Area Host Committee in their bid to host the 2026 FIFA World Cup. Just as sports brings the world together, we believe technology connects communities across the globe,” said Sarah Franklin, President and Chief Marketing Officer, Salesforce. “Together, our region’s commitment to global connectivity and Salesforce’s #1 value of trust will provide an outstanding and safe World Cup experience. We are proud to have called the Bay Area our home for the last two decades, and we are thrilled to showcase our unique innovation and spirit to a global community.”

“Airbnb is thrilled to support the Bay Area bid to host matches during the 2026 World Cup” said Chris Lehane, Senior Vice President of Global Policy & Communications at Airbnb. “Since our founding, Airbnb has helped cities use existing space to scale accommodations and absorb influxes of visitors during major events like the World Cup, all while creating important economic opportunities for local Airbnb Hosts and the small businesses Hosts recommend to visiting fans.

As a melting pot of cultures, an established sports destination, and home to a community of Hosts ready to open their doors, the Bay Area is a perfect stage for one of the biggest global sporting events.”

“We’re incredibly excited to be a part of the Bay Area bid to bring the World Cup to the region. For over two decades, we’ve called the Bay Area home and we continue to grow and invest here, because it is a global innovation hub and destination for people from all over the world” said Rebecca Prozan, Google’s West Coast Government Affairs Lead.