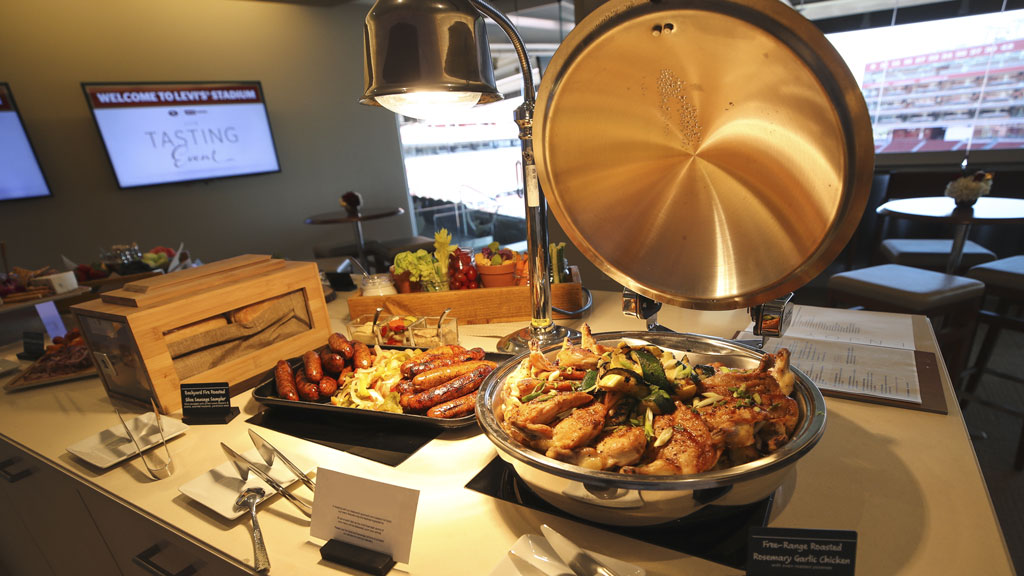 The 49ers and Levi’s® Stadium partnered with Levy to make dining on gameday an amazing and memorable experience for fans. Levy is best known for creating incredible dining experiences at many of the world’s most iconic sports and entertainment venues, including the Kentucky Derby, US Open, Wrigley Field, PGA Championship, and countless NBA, MLB, NHL and MLS All-Star Games, among others. This season, 49ers fans will notice an infusion of Bay Area favorite restaurants and new signature dishes spanning the wide range of flavors that define dining in The Bay. Several concessions and club dining destinations have also been refreshed with new dining concepts, and fans can take advantage of new self-service technology at a redesigned concession stand on the main concourse.

LEVI’S STADIUM’S CHEF, JON SEVERSON
Jon Severson is a senior executive chef for Levy and leads the Levi’s® Stadium culinary team. Chef Severson has served fans in many of the nation’s top sports venues and his passion for seasonal, local products shines through on menus across concessions, suites and clubs, where he harvests fresh produce from the stadium’s one-of-a-kind garden. Last season, Chef Severson introduced “The Coin Toss” signature dish competition at Touchdown Terrace, and this season fans will find more elevated takes on classic stadium fare.

SELF-SERVICE KIOSKS
Levi’s® Stadium harnesses the power of data and experiential design from Levy and its technology and analytics subsidiary, E15 Group. This season, fans can take advantage of 11 new self-service kiosks at the concession stands outside section 132 to customize orders from a menu of favorite hot dogs, pretzels, chicken tenders and garlic fries. These stands are now cash-free and accept all major credit cards as well as mobile payments. Fans will be able to order themselves via touchscreen at the kiosk and pick-up their order at a designated counter at the stand.

Look for more hospitality technology news throughout the season.