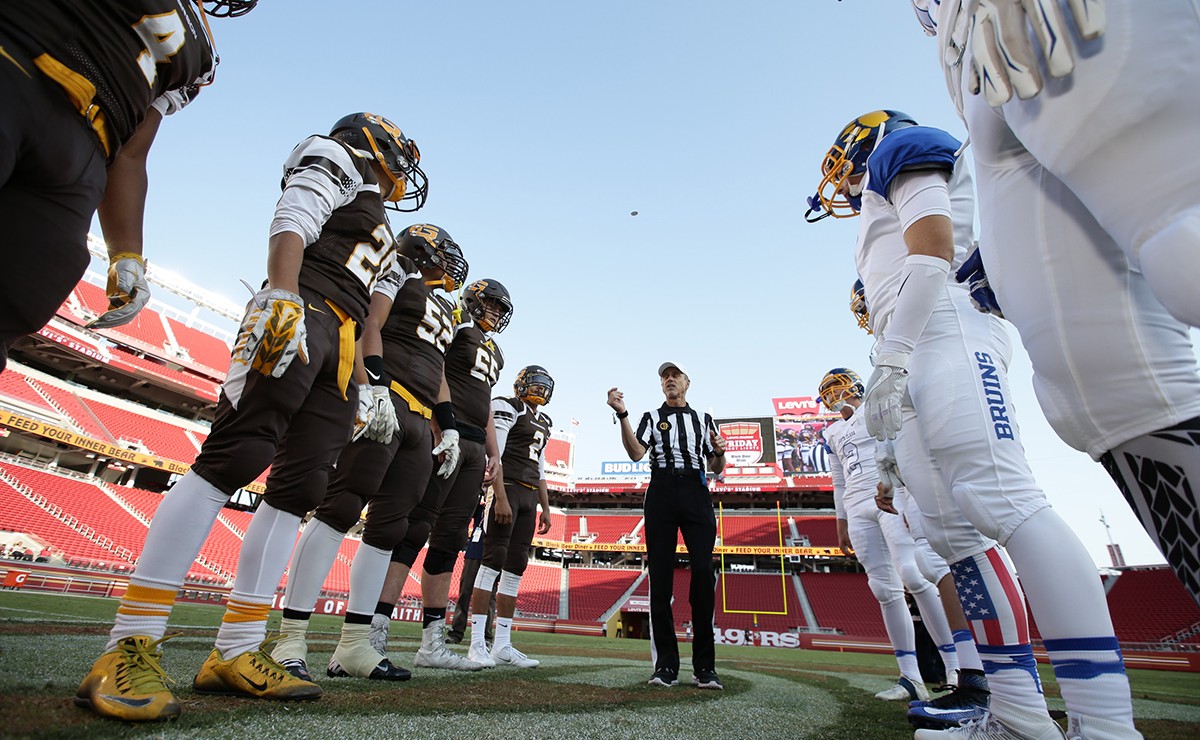 The San Francisco 49ers will continue the tradition of hosting an annual high school football double-header at Levi’s Stadium on Saturday, September 23rd, with the staging of the Levi’s Stadium High School Football Series presented by Foster Farms. Formerly known as Friday Night Lights, the fourth installment of the event will feature Los Altos (CA) vs. Wilcox (Santa Clara) at 3:30 p.m. followed by St. Mary’s (Stockton) vs. Mater Dei (Santa Ana) at 7 p.m., two teams ranked nationally in the top-25.

General admission tickets in the lower bowl of Levi’s Stadium went on sale today at 10 a.m., for $10 at TicketMaster.com. Please use the following link to purchase tickets: http://www.ticketmaster.com/event/1C0050FC9CA23E14.

Media looking to cover this year’s event must complete an online credential application at the following link: Levi’s Stadium High School Football Series Credential Form. The deadline for all credential requests is Friday, September 22nd. Please note that 49ers 2017 season credentials will NOT be accepted.

Hosting the annual Levi’s Stadium High School Football Series is just one of many ways that the 49ers organization works to support youth football instruction and provide leadership skills to kids from age 5 to 18 throughout the Bay Area and beyond. The 49ers Youth Football Program was recently named the Pop Warner Little Scholars NFL Team of the Year in 2017 for its collective youth football efforts.

The 49ers Youth Football Program provides youth with the opportunity to experience football through a multitude of diverse programs aimed at creating young, healthy leaders on and off the field. In 2016 alone, the team directly impacted more than 31,000 participants and hosted 138 events in partnership with the NFL’s “Play 60” initiative, which encourages children to get outside and play for 60 minutes each day.

Levi’s Stadium also hosts the annual Charlie Wedemeyer All-Star High School Football Game, giving high school seniors one last opportunity to put on the pads to represent their school for the last 43 years. In conjunction with USA Football, the 49ers have also hosted a media day for more than 35 local high school football programs each of the last two years.

For the past two years the 49ers have hosted the Cal-Hi Sports Bay Area Awards banquet, which honors outstanding high school athletes all around the Bay Area. Over the past 15 years, athletes and coaches at the banquet have received nearly $500,000 in college scholarships and gifts to schools.

For more information on the 49ers Youth Football Program and its year-round activities in Northern California and beyond, please visit: www.49ers.com/community/youth-football.html.