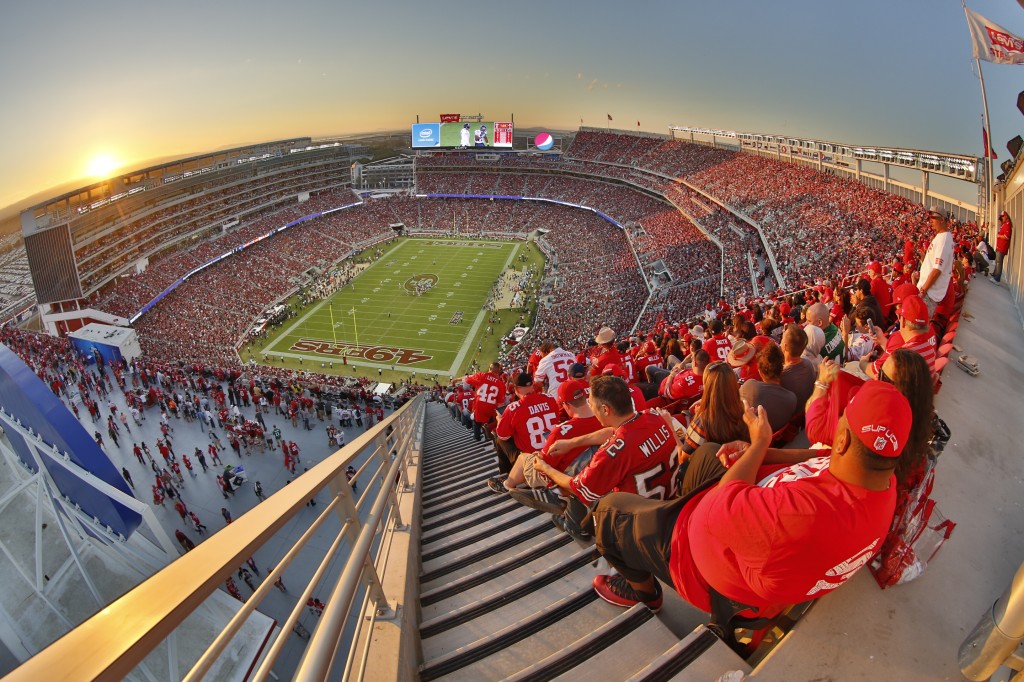 Leo Nomellini and Russ Francis are remembered by long-time 49ers fans as Pro Bowl football talents. But during the off-season, both men ventured onto the wild side by showcasing their considerable physical skills as top-notch wrestlers.

Wrestlemania 31 arrives at Levi’s® Stadium on March 29 marking another joint venture between the NFL and Wrestlemania. Back in 1986, at Wrestlemania 2, Francis was among a handful of pro football stars involved in the infamous Twenty Man Battle Royal. Francis shocked the wrestling world by surviving the mayhem until just four men were left standing in the ring.

Among the other NFL players competing at the Horizon in Rosemont, Illinois that night were Cowboys defensive end Harvey Martin, Bears defensive tackle William “Refrigerator” Perry, Falcons guard Bill Fralic and Bears tackle Jimbo Covert. They took on the cream of the pro wrestling crop matching body slams with legendary grapplers like Andre the Giant, Big John Studd and The Iron Sheik.

The match began with 20 athletes, weighing a combined 5,600 pounds, packed together in a 20’ x 20’ square. Before the ring announcer finished introducing the combatants, they began throwing haymakers at one another. Men weighing upward of 300 pounds were tossed from the ring like ragdolls. Ten minutes later, Francis was one of the final four still standing.

Unfortunately for Francis, the Battle Royal’s eventual winner, 7-4, 520-pound Andre the Giant, had his eyes on the 49ers tight end. In his heyday, Francis was one of the NFL’s largest pass catchers, standing 6-6 and 245 pounds, but he was no match for the Giant. Francis used his speed and agility to outmaneuver Andre, but once the Giant got his enormous hands on Francis it was all over. Andre clobbered Francis with a wicked headbutt then tossed him around the ring mercilessly. The Hart Foundation (Bret Hart and Jim Neidhart) finished off Francis and threw him over the ropes.

Francis, who spent six seasons with San Francisco from 1982-1987, and was a member of the Super Bowl XIX championship team, was no stranger to wrestling. His father, Ed Francis, held several pro wrestling titles, including the National Wrestling Alliance’s Pacific Northwest Heavyweight championship, and was a successful wrestling promoter in Hawaii. After retiring from the NFL, Francis continued his wrestling career and at one time held the NWA Hawaii Tag Team Championship along with his brother, Bill Francis.

Thirty years before Francis claimed a title, Pro Football Hall of Famer Leo “the Lion” Nomellini held several NWA championship belts. Nomellini was a pillar of the 49ers line for 14 years from 1950-1963. He started at both offensive and defensive tackle for five seasons and made ten trips to the Pro Bowl. During the offseason Nomellini found his niche in the ring where he dominated opponents with his signature move, “The Flying Tackle.” He was a popular performer on the West Coast wrestling circuit during the 1950s.

“Leo once was asked what sport was harder, football or wrestling,” recalled Bob Fouts, a former commentator for 49ers football and local pro wrestling matches. “In all sincerity, Leo said wrestling was harder because you had to drive to Stockton, Modesto and Fresno. But that was Leo. I think he would rather have wrestled than drive.”

In 1969 Nomellini became one of the first 49ers selected to the Pro Football Hall of Fame. A life-size statue of Nomellini can be seen in the Hall of Fame gallery at the 49ers Museum presented by Sony. Also on display are Nomellini’s 49ers sideline jacket and game jersey, as well as wrestling programs from his career.

The 49ers Museum presented by Sony will be open to ticketed guests before the start of Wrestlemania 31 on March 29. Guests can view interactive 49ers film highlights, see the re-creation of Coach Bill Walsh’s office, or stroll through the Super Bowl Gallery where all five Lombardi Trophies are on display. For more information on Museum tickets, hours, and content, visit levisstadium.com/Museum. For group pricing call 415-GO-49ERS.