The Northern California Toyota Dealers Association signed a multi-year, multimillion dollar contract with the San Francisco 49ers to become the exclusive auto partner of both the team and Levi’s® Stadium. The partnership will commence with the 2014 NFL season.

With hybrid leadership dating back to the introduction of the Prius in 2000, Toyota has a history of merging technology with its commitment to the environment, making it a natural opportunity for Toyota to be the exclusive auto partner of the stadium and the team. Located in the heart of Silicon Valley, Levi’s® Stadium touts unprecedented in-stadium technology offerings for fans, and sustainable touches that range from the photovoltaic panels that convert solar radiation into electricity, to water-conserving plumbing fixtures.

“Toyota’s roots in innovation and sustainability run deep,” said Henry Hansel, president of Northern California Toyota Dealers Advertising Association. “Given the 49ers new home in Santa Clara combines cutting-edge technology that one would expect from Silicon Valley, with an eco-friendly focus uncharacteristic for an outdoor stadium, a partnership seemed like a natural fit for Toyota. Toyota will be behind the 49ers every step of the way as they focus on nabbing a sixth Super Bowl victory.”

As a market leader in Northern California, with more than a 20 percent share, Toyota has a deep commitment to the local community. The San Francisco 49ers organization is a pillar of the Bay Area community and creating a strategic relationship was an organic fit.

“Toyota has utilized innovative technology to develop groundbreaking sustainable advancements in their industry for years,” said Jed York, CEO of the San Francisco 49ers. “Together we will present an unparalleled fan experience at the Levi’s® Stadium.”

One of the most notable elements of the partnership will be the Toyota Plaza, comprising the Northeast Entrance Gate to the stadium, complete with Toyota signage and vehicle exposure. Fans will experience the partnership firsthand with the Toyota Red Zone. Any time the 49ers’ offense is within the 20-yard line, the Toyota Red Zone will splash across in-bowl digital assets. Toyota will extend the partnership beyond gameday to supporting the team in its green initiatives, youth football campaign, fan events, and beyond. 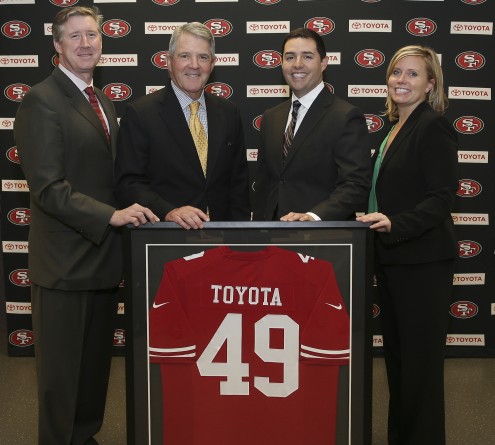