Ten Reasons to Apply to Work at Levi’s® Stadium

Everyone is a playmaker.

At least everyone on the new, growing Levi’s® Stadium event-day team.

Every single stadium hire will be counted on to exceed the expectations of our guests, whether they are working in guest services, janitorial, Centerplate concessions, security or parking.

Particularly in guest services, which is in the hunt for new employees. In fact, there are 900 openings, including 50 supervisorial positions.

Members of this department will take tickets, provide direction to fans, operate elevators and manage access to sections and aisles.

We at LevisStadium.com came up with 10 reasons to submit your application.

Let’s face it: How many people get to say, “I work at the brand new Levi’s® Stadium”?

The first event, the first 49ers game, the first time you help guests get the most out of the ballpark’s many offerings – and so many more.

Levi’s® will be home to the 49ers, but it will also be home to major concerts and intriguing college football matchups, plus other yet-to-be-announced events.

Speaking of major events you’ll be a part of, consider that Santa Clara will host the NFL’s 50th title game in 2016. The 49ers might even be playing in it.

The details on this are still to come, but the 49ers are outfitting their new home with all the bells and whistles befitting a Silicon Valley hotspot.

There may be some real-time problem-solving along the way, but guest services prides itself on serving guests – go figure.

Your responsibilities at the stadium can be shuffled, and while faces will become familiar, you’ll never feel like you’re starring in a “Groundhog Day” remake.

Look at it this way: You’ll be a part of the very first crew to work at the stadium. The hours may be long, but it won’t feel that way.

With an experienced stadium operations unit that is pushing to do things better than they’ve ever been done elsewhere in the industry, you’ll be a part of a group that is looking to back up its ambition with results.

We’re quoting 49ers coach Jim Harbaugh here because it’s so appropriate. The team is coming off three straight trips deep into the postseason, and it’s looking for playmakers to extend the run. We’re looking at you.

If we convinced you, apply here. 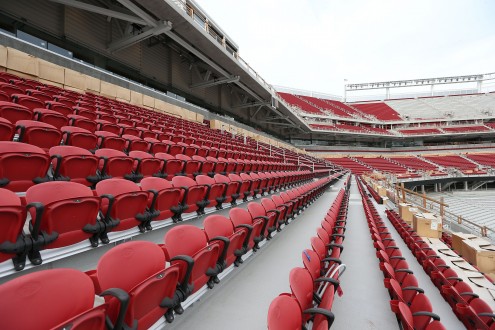