Oregon, Cal Continue to Be Breeding Grounds for NFL Draft

Thirty-four players from the Pac-12 Conference were selected during the three-day NFL Draft over the weekend.

Six hail from Cal and the University of Oregon, the schools that will play in the first ever college football game at Levi’s® Stadium come Oct. 24.

Don’t worry: The cupboard in Berkley and Eugene isn’t bare.

Among the schools’ next wave of stars are Cal quarterback Jared Goff, who wears No. 16 in honor of Joe Montana, and Oregon quarterback Marcus Mariota, who is already on the Heisman Trophy radar of some experts.

Tickets are available to watch the Pac-12 competitors face off this fall — check availability here.

For now, let’s take a closer look the Golden Bears and Ducks who could be coming to Levi’s® Stadium as professionals.

NFL.com’s Bottom Line: “Smooth, competitive, versatile receiver with an impressive skill set which translates well to the evolution of NFL offenses. Can work at flanker or slot and has potential to become a No. 2 or No. 3 receiver in a system incorporating spread concepts. Is the type of player you root for, having persevered through an adverse upbringing and lingering baggage, which forced him to mature the hard way. Would be best served landing in a close-knit locker room with a nurturing position coach.”

Bottom Line: “A deluxe, specialty back and potential slot receiver with game-breaking return ability, Thomas can be an explosive mismatch weapon in multiple facets of the game. Diminutive stature will decrease the odds he’ll be able to stay healthy in the pros, and his commitment to the game will dictate his future success. Rare speed creates a higher commodity on draft day.”

Bottom Line: “Big-framed, smart, active, high-effort player who willingly does the dirty work and will make it difficult for coaches to cut him. Best chance to stick could be as a five-technique, but could also draw interest as a developmental left end. Has the makeup to surprise if he learns to play with power.”

Bottom Line: “Wiry, smoother-than-sudden, off-man/cover-3 corner who upped his visibility as a junior by showing improved playmaking ability, which prompted a premature leap to the NFL. Could compete for a job as a No. 4, but lack of ideal explosiveness, top-end speed and bump-and-run ability limits his ceiling.”

Bottom Line: “Rodgers’ career arc was affected by Cal’s coaching turnover, as the former high school receiver was recruited as a tight end by Jeff Tedord’s staff and bulked up to 275 pounds as a sophomore when he was out of shape, in part because of a torn labrum and torn foot ligament. As a junior, Rodgers shed 30 pounds and shifted to inside receiver for Sonny Dykes, enabling him to show his more natural “F” tight end skills. Is an unpolished product, but could be a better pro than college player.”

Bottom Line: “A better athlete than football player at this stage of his development, Fortt transferred from Penn State and played only one season at Cal before making a premature jump to the NFL. Speedy, finesse, see-and-go reactor who looks the part and has intriguing, starter-caliber athleticism to fit on the weak side in a fast-flowing 4-3 where he’s freed up to chase the ball. Must sharpen his eyes and instincts to reach his potential.” 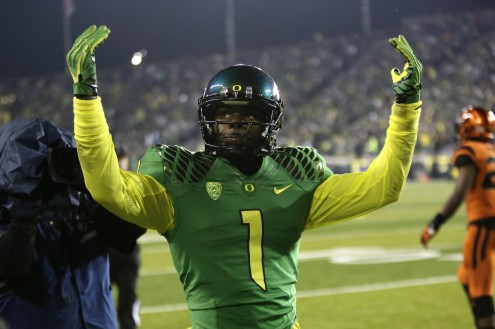