When Ms. Quinlan’s students deserve a gold star, they get a red-and-gold souvenir.

Stephanie Quinlan is a fourth-grade teacher in Pacifica, Calif., but she’s also entering her ninth season as a member of the San Francisco 49ers guest services department.

“I’ve loved every minute,” she said. “I look forward to going to the park, to seeing my season-ticket holders, some of whom were at Kezar Stadium, and having those moments to chat with them.”

This will continue at Levi’s® Stadium.

We caught up with Quinlan, a Napa native and longtime 49ers fan, to ask her about working upper reserve sections 16 to 18 at Candlestick Park, her transition to Levi’s® Stadium and whether it’s harder to manage her kids or her ticketholders.

If you’re interested in joining her at Levi’s® Stadium, apply to the team here.

Q: Tell us about your fandom of the 49ers…

A: I grew up with Rice and Ronnie, the San Francisco treat, and I grew up with Steve Young and the rivalry with Dallas. It was who I was growing up, every Sunday with the family watching games.

Q: Did you go to many games growing up?

A: I only got to Candlestick once as a fan. My brother has purchased season tickets to Levi’s® Stadium, so I’m curious about whether I’ll be in his section or not.

Q: Was it a no-brainer to go from working at The ‘Stick to Levi’s® Stadium?

A: I was more worried that they wouldn’t want me. You hear the rumors swirling around about whether everyone from Candlestick would get hired. I thought, ‘Well, I’ve done a fairly decent job, so I’ll put in an application and try.’ With the move to Levi’s® Stadium, I thought it would be a good opportunity – it’s a new season at a new stadium – so that’s why I applied to be a supervisor.

Q: What were your duties at Candlestick?

A: I was an usher, so I used to joke that it was my job to check your ticket and make sure you sat down and watched the game. Sometimes, it was pretty similar to being a teacher because I would be in situations where I would have to try to figure out what was in the right and who was in the wrong, who needed a timeout and who needed to go home.

Q: What’s harder, getting your students to behave or your guests?

A: Getting the fourth-graders to turn in their homework is harder than getting fans to sit down and enjoy the game. Remember, they are paying good money to be at the game, and as an usher, you never want to have to tell a fan to leave the game.

Q: How did you settle disputes?

A: My trick was I always brought a giant bag of candy with me to the game, because I learned pretty quick that the season-ticket holders didn’t want to show me their ticket. So I stand there with the bag of candy and say, ‘Show me your ticket and you can have a piece.’ By the end, I had all my season-ticket holders trained. It was also a good way for me to memorize what someone was wearing, whether they were in my section or not, which kid was with which adult.

Q: Do you have a favorite memory of working at Candlestick?

A: I saw a lot of press box traffic coming in and out, which was always very interesting to see some of the bigwigs. The elevator was pretty slow and, at times, broke, so one day Jed York walked up my section, up to the press box. And there was a dad there and he was so excited because it was his son’s first game, so he happened to turn around and ask the gentleman behind him to take their picture. Well, he asked Jed York to take his picture. My mouth dropped. Jed was wonderful. He took the picture. Then I took the phone and said, ‘I’ll take a picture of the three of you.’ After Jed was escorted back up to the press box, I asked the dad, ‘Did you realize who that was? That was the owner of the 49ers.’

Q: How would you put into words the value of a good guest services representative?

Q: What excites you most about working at Levi’s® Stadium this summer, next fall and into the future?

A: The newness of it all, the ability to help breathe life into this stadium, to help set a tone among the fans. And to be a part of something bigger than myself, to be there for the beginning of Levi’s® Stadium. 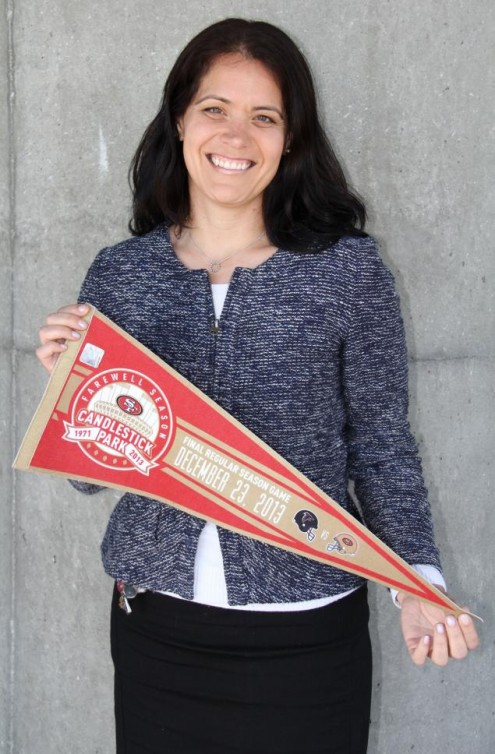