A man tried sneaking into a Cal football practice last year until a member of the athletic program stopped him in his tracks.

“‘Can I help you?’” the official recalled asking the man. “His back was turned to me.”

And then Joe Montana turned around.

The San Francisco 49ers Hall of Famer was in Berkeley to visit a family friend on the squad, but he hasn’t yet met the Golden Bears starting quarterback.

With Goff and the Pac-12 school set to “host” Oregon in the first college football game to be played at Levi’s® Stadium on Oct. 24, 49ers.com caught up with the sophomore signal-caller to discuss his fandom of the team, his admiration for Montana and his own NFL aspirations.

How long have you been a fan of the 49ers?
My whole life. I grew up watching them. The Jeff Garcia days are the days I remember, with Garrison Hearst, a little bit of the end of Jerry Rice’s career. And their recent success has been pretty exciting. I was heartbroken when they lost in the NFC Championship game to the Seahawks, but I’m excited for the future.

Did you go to many games at Candlestick Park over the years?
We didn’t have season tickets, but we went to some. I went to the final game at Candlestick this past year. That was a really cool experience. I hadn’t been to a game in a while – I was busy with our season – and to get to go that was awesome. For NaVorro Bowman to get that pick at the end was pretty awesome. I just remember Jim Harbaugh running down the sideline pulling his headset off. And season-ticket holders around us were crying – it was intense.

As a fan, what do you make of the team’s switch from The ‘Stick to Levi’s®?
Candlestick has a cool historical background, but Levi’s® will bring a modern feel to the team. I found out this offseason that we’ll get to play there. It’s exciting to get to play in an NFL stadium.

Have you played in one before?
I played at the Coliseum (in Oakland) as a junior in a high school championship game. I’m assuming the sideline will be a little bigger.

So tell us why you wear No. 16 in honor of the 49ers No. 16?
When I was little, for my fourth or fifth birthday, my dad got me a Joe Montana jersey. I didn’t know who Joe was, but when I started playing football we had our number choices and 16 was available. That’s when I was 7 years old. The next year, I wore 16 again. I’ve worn it my whole life.

But you wore No. 9 for spring practices last season – why?
We had a player on the roster that was wearing 16, but he transferred a few months later. So when he transferred, I jumped on it.

Now that you’re older, do you still look up to Montana?
I’ve got some signed memorabilia from him in my room, and I see clips from back of the day. I like to watch guys that are good at the position and take stuff from their game. Tom Brady, Peyton Manning, Aaron Rodgers, all those guys as well as Joe Montana.

What about Montana’s game do you try to incorporate into your own?
He was deadly accurate, and I try to be. Another thing was his presence on the field. I try to emulate that, too.

Have you met him?
He came to a couple practices last year, but I’ve never met him. If I could ask him anything, I’d ask him to tell me stories or offer some little tips on playing the position. It’d be more cool just to be in his vicinity.

What do you make of Colin Kaepernick’s style of play at the position?
Colin’s a really good quarterback as well, plays the game differently than I do. He’s fast, and I’m trying to work on speed. There’s footwork drills I do for that. I was actually just talking with our running backs coach about ways I can get faster. I’m not ever going to be a blazer like Kaepernick is, but I’ll be able to get better.

Speaking of improvement, where have you made the most gains since your 18-touchdown, 10-interception campaign in 2013?
I feel like I’ve improved the most since the Stanford game with my feel for the game, my feel for the college level. It’s no longer, “I’m the young guy out there, and I’m trying to catch up.” It’s like, “I’m in charge, and I’m leading the offense.” So far this spring, I can tell how much more comfortable I feel than I did last fall.

As a team, you went 1-11 last season. What’s going to help change the results in 2014?
The experience is going to be a huge factor. Everyone is returning on offense, all the key playmakers. We’re going to have some weapons at my disposal. It’s really nice to have that kind of camaraderie after going through what we went through last year.

Beyond this season and the next couple, do you hope to one day join the likes of Kaepernick in the NFL?
That’s the main goal at the end of the day. Right now, I’m thinking about winning games and getting better, but that’s definitely a long-term goal down the line.

Will Oct. 24 be a good test for you along the way?
It’s going to be more NFL-like given the atmosphere and that Oregon is a great team. We’re going to compete really well and hopefully come out with a “W.” 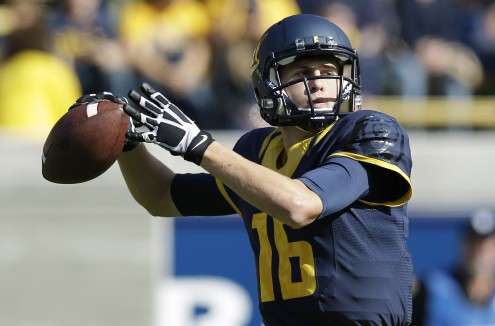