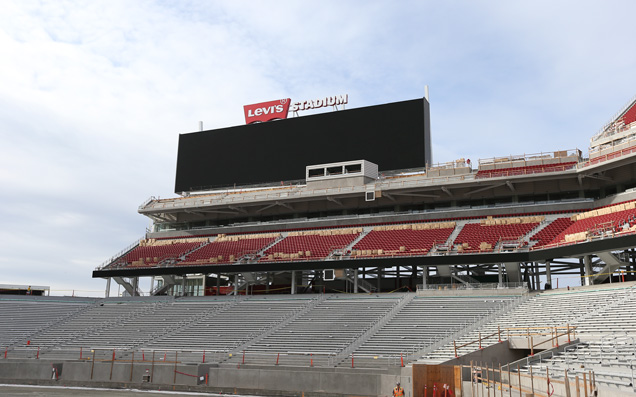 The first professional sporting event at Levi’s® Stadium is less than five months away. With the countdown clock ticking, we thought it wise to answer some of your Twitter questions. After all, one must know the high-tech, state-of-the-art building in order to take advantage of its many capabilities. In this second edition of Learning Levi’s®, we tackle queries on seating, tours and tickets.

@49ers I work at a Levi’s outlet and applied at Levi’s stadium, will it be easier to get a job that way or no? #learningLevis

There’s no affiliation, but some Levi’s® experience on your resume wouldn’t hurt. Maybe apply to guest services. It seems that working in an outlet would have strengthened your interpersonal skills. Feel free to apply to stadium job postings here.

@49ers will there be any pre game activities before each game ? #LearningLevis

There absolutely will be a variety of pre-game events on a weekly basis, but plans are still being finalized, so stay tuned. One pre-game event we can expand upon: Chef Michael Mina’s Tailgate, which you can learn more about here or by following @BourbonSteakPub on Twitter.

@49ers When do single game tickets go on sale?! #LearningLevis

Expect early summer, but stay tuned for a specific date. Right now, tickets are on sale for the San Jose Earthquakes-Seattle Sounders FC Major League soccer game, which will open Levi’s® on Aug. 2.

@49ers will there be an opening ceremony before the San Jose vs seattle game? #LearningLevis

Yes, details are still being worked out, but there will be a ribbon-cutting ceremony during the summer to commemorate the upcoming grand opening.