Tickets for First Stadium Event On Sale Friday at 10AM PST

The Santa Clara Stadium Authority and the San Jose Earthquakes have partnered to present the first event at Levi’s® Stadium. The Earthquakes will play host to the Seattle Sounders FC in one of Major League Soccer’s most heated rivalries on August 2, 2014.

Tickets for the game will be available on Friday, March 14 at 10:00 a.m. PT via Ticketmaster. Suite rentals are also available by calling 415-GO-49ERS.

The match continues to demonstrate the growth of MLS, as the Quakes will again host a regular season match at a large-scale venue. San Jose has played matches at Stanford Stadium the past three seasons with all those games topping 40,000 fans. The Earthquakes most recently defeated the LA Galaxy 3-2 on June 29 in front of 50,028 fans at Stanford Stadium. 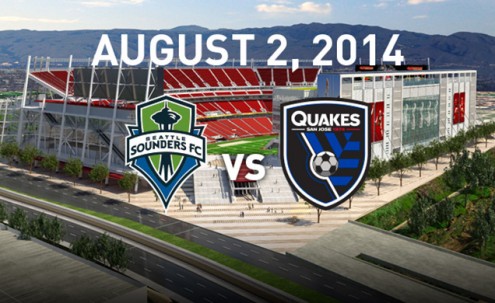