Not long after Jordan Stewart chose his MLS team, he had to pick his NFL team.

“I went with the 49ers,” said Stewart, a midfielder who came to San Jose last summer after 15 seasons as a professional across the pond, where he shifted in and out of the Premier League. “The guys gave me a hard time for choosing the better team, saying I was the frontrunner. For me personally, the 49ers are known across the Silicon Valley. Even growing up in England, you know who the 49ers are. I’m an adopted fan.”

In a locker room of soccer players with allegiances to both Bay Area football teams, Stewart is on the right side for another reason; he gets to open San Francisco’s new Santa Clara-based ballpark.

Tickets go on sale on Friday, March 14 at 10 a.m. PT via Ticketmaster.

We caught up with Stewart, who turned 32 this week, to discuss his interest in the 49ers, their new stadium and what we can expect from his ‘Quakes.

So your teammates’ interest in American football piqued your own?

When I came over, all the guys like talking about fantasy football. I hadn’t ever played football other than playing ‘Madden Football’ on the computer. The basic rules I knew, but as I watch more and more, I learn the players and the positions.

How knowledgeable are your family and friends back home?

How invested are you in the 49ers success?

I watched the last playoff game in a bar with some friends, and I was really disappointed. I can’t imagine how disappointed the people who have been fans for years were.

You have this on Kaepernick and Co. – you get to play a game at Levi’s® before the 49ers…

I found out on Twitter when I was in England. As an organization, it will help boost the MLS.

He didn’t get to play, but our own Lawrence Okoye got to be on the sideline for the 49ers win in London this past season…

As a soccer player, I know how cool it is to play at Wembley (Stadium). I imagine Levi’s® will remind me of some of the Premiership stadiums I have played in.

Alright, now some serious stuff. You’re listed at 6 feet tall and 180 pounds – what position would you play in our version of football?

Wide receiver – a lot of people want to play quarterback, but I figure if I’m playing wide receiver, I’ll be able to talk a little trash.

Do you talk that much to opponents while playing soccer?

Not to that extent. In football, I would be able to get away with it.

So you’d rather catch the pigskin than throw it?

I tried to throw a football, but my technique is horrible. One time we were shooting hoops and I missed the rim altogether. I need to work on my American sports. The boys give me trouble for it. I have to learn.

What stands out to you as the major difference between your sport and ours?

If fans haven’t been to a soccer game, I say: Have a look and see what you think. Football is very much start and stop. Soccer is constant for minutes, up and down the field.

Before we let you go, what can 49ers fans and Levi’s first crowd expect from the Earthquakes?

We want to get in the playoffs. Last year was disappointing because we didn’t. As a defender, I’m not OK with allowing more goals than we scored. We want to win the MLS cup; I want to play in that game. Some of the boys will just say, ‘We’ll see how it goes,’ but we have the players and coaches to do it. 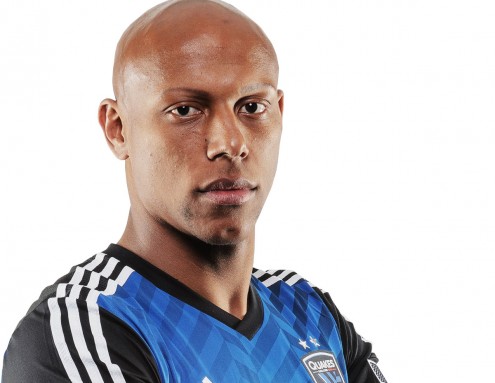