When Phil Dawson saw that the 49ers had installed the NFL’s first collapsible field goal posts at new Levi’s® Stadium last week, he wasn’t looking at the bright yellow cross-bar.

Dawson focused instead on the waving red flags atop each post.

Then he went to Weather.com and found Santa Clara was sporting 10-mph winds.

“That’s the life I live,” Dawson said. “There’ll be some adjustments and a learning curve in going to a new stadium, but that’s exciting – that makes it fun. It’s very similar to the situation I was in this time last year.”

Speaking with Bay Area reporters in the wake of his new two-year contract on Tuesday, Dawson was already looking forward to his new digs. Even general manager Trent Baalke cited the positive of re-signing Dawson for the inaugural season at Levi’s®.

“I’ve got to spend sometime in the new stadium and put my work in so that I’m prepared for those games in September,” he said. “We’ll see about the wind. I’m going to try to get in there.”

Dawson set a franchise record with 27 straight executed field goals in his debut season with San Francisco in 2013. He also finished the regular season with the organizations second-most field goals made (32) and points (140) in a single season.

“I wanted to come in and perform at an elite level,” he said. “That’s my expectation going forward.”

The 15-year has been vacationing with his family in Florida. He’ll return to his home in Austin, Texas, and over the next two weeks will finalize his offseason plan to come to Santa Clara.

Dawson will challenge himself to match his first campaign here – all while doing it in a new stadium.

“It’s a beautiful place,” Dawson said of Levi’s®, “and I look forward to playing in it.” 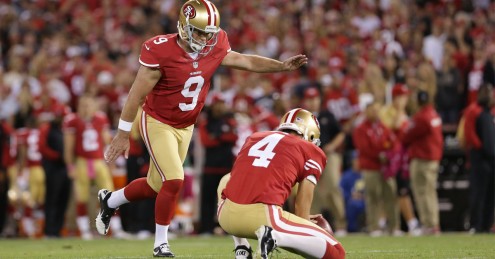