They are the first automatic, collapsible posts in the NFL.

Here’s what that means: After the final whistle of 49ers home games, it will take a single member of the Levi’s® Stadium grounds crew eight seconds to lower the uprights and cross bar onto the field. All he’ll need to lay them flat on the grass is a simple drill motor. (Raising the uprights and the cross bar takes 30 seconds.)

Wiley, a Pasadena, Calif. city employee for 40 years before he retired, was inspired to create this flexible system for NCAA football stadiums after his work overseeing public safety at the Rose Bowl.

“It’s become popular again, mostly in the NCAA, for fans to rush the field after a game and tear down the field goal posts like they did when they were old and made out of wood,” said Wiley, who has installed his product at Boston College, the University of Arizona and plans to do the same at Texas A&M next month. “What happens now if you tear a structure like that down, you bonk somebody on the head with a piece of 30-foot piece of aluminum, there’s going to be injuries.

“I scratched my Walter Mitty head and said, ‘I think I can do this,’ and this is what I did.”

The 49ers hired Wiley, the patent-holder on the system, to keep their new stadium on the cutting edge.

“When I first talked to the San Francisco management people at the Rose Bowl, I got the hint that this stadium would be very high on technology,” Wiley said. “I didn’t understand what that could possibly mean until we came out here. This whole place is technology, and we like to think that our product leads the field in technology as far as goal posts go.”

While the posts increase safety on the field, they will also ease the stadium’s transition for non-football events. To completely remove the posts from the field, all that would be required is a two-man crew, a forklift and 30 minutes. (Re-installation could be accomplished in less than an hour.)

All that stays inside the stadium at all times are two steel structures, a trunk and a gooseneck, that serve as the posts’ base but are 18 inches below the grass, which hasn’t been installed yet.

Early Friday morning, the crew started by setting this base under gravel behind the south end zone. A hydraulic unit allows the posts to lift up and down with the hand – and drill – of a single operator.

Call that an extra point. 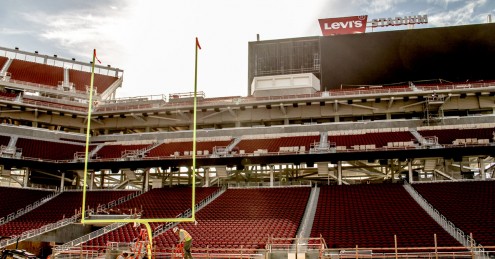