One of professional football’s most storied franchises, the 49ers will play their first NFL season at Levi’s® Stadium in 2014. Through partnerships with technology providers like Comcast, the 68,500-seat, open-air stadium, which will host Super Bowl L in 2016, will showcase Silicon Valley innovation and features stadium-wide WiFi access, mobile connectivity, IPTV, and HD video boards measuring over 13,000 square feet. The stadium will also feature a ticketless, cashless infrastructure designed to increase convenience for attendees.

As part of the partnership, Comcast will provide fiber-based Ethernet Internet access and video capabilities throughout Levi’s® Stadium, sponsorship of free WiFi for fans, and cloud-based voice and unified communications services for employees at the stadium and at the team’s corporate offices. Additionally, Comcast SportsNet Bay Area will build a new, state-of-the-art, 1,000 square foot TV studio – CSN Bay Area Studios at Levi’s® Stadium – for gameday broadcasts and other 49ers-related programming on CSN Bay Area and NBC Bay Area.

“Located in the heart of Silicon Valley, Levi’s® Stadium will feature new and exciting ways for the team’s fervent and tech-savvy fan base to experience a live event, from ubiquitous WiFi to innovative mobile applications and rich video content,” said Bill Stemper, President, Comcast Business. “This partnership is representative of how Comcast, by deploying our full suite of consumer and business products can deliver reliable, high-capacity Internet connectivity for fans, media and stadium employees while supporting various multimedia initiatives.”

Specifics of the deal include:

Comcast Business Ethernet: Comcast Business, the Official Internet Partner of the San Francisco 49ers, will equip the stadium with redundant 10Gbps Ethernet Dedicated Internet lines which will provide Internet access for media and team employees prior to the opening of the 2014 NFL season.

Comcast’s Business VoiceEdge: This service gives stadium employees and front office staff cloud-based voice and advanced unified communications services, including a mobile app so they don’t miss a call wherever they are in the world.

Xfinity from Comcast: Comcast will provide the in-house video feed to all television monitors at Levi’s® Stadium, as well as video services in specific areas of the venue under the company’s Xfinity brand, allowing patrons to access ancillary programming while attending concerts and other events at the venue.  In addition, interactive Xfinity-branded kiosks will be installed throughout the stadium, allowing fans to sample Xfinity products and have a hands-on interaction with new technology.  In addition, the iconic XFINITY Couch will be built into two locations within the stadium, allowing a select number of lucky fans to have the “Best Seat in the House”

“We are pleased to extend our ever-evolving partnership with the San Francisco 49ers and honored to be a partner of Levi’s® Stadium,” said Ted Griggs, president and general manager of Comcast SportsNet Bay Area. “Fans have come to rely on Comcast SportsNet as the region’s leading source for comprehensive, in-depth multi-platform 49ers coverage. The new CSN Bay Area Studios at Levi’s® Stadium, along with hundreds of hours of 49ers programming throughout the year, demonstrates our ongoing commitment to present the most complete, entertaining and innovative coverage for the many passionate 49ers fans throughout the region.”

NBC Bay Area:  NBC Bay Area, The Official Broadcast Partner of the San Francisco 49ers, will feature unique 49ers content including practice video and exclusive interviews, as well as historical video from the team’s archives. The station will also air 49ers Way and The Faithful, which can be re-broadcast on CSN Bay Area. This programming agreement further strengthens NBC Bay Area and CSN Bay Area’s existing partnership in providing the most comprehensive sports content and coverage in the market.

“We look forward to providing Bay Area viewers with first class 49ers content over the next 10 seasons,” said Richard Cerussi, president and general manager of NBC Bay Area. “NBC has a long-standing association with the NFL and we are thrilled to be the official broadcast partner of the 49ers, particularly in 2014 a partner of the new Levi’s® Stadium.” 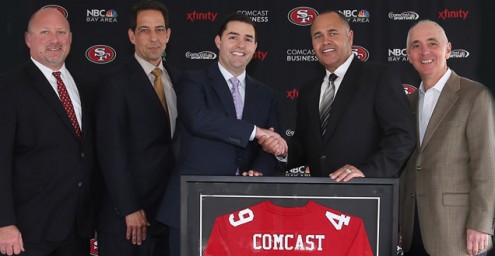