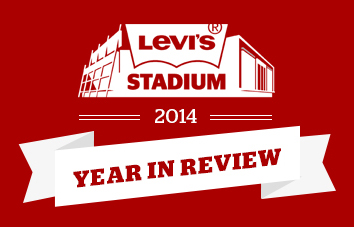 From ribbon cutting to kicking off our inaugural season with the 49ers, take a look back at some highlights from the 2014 year.

Eight hundred and nineteen days after the 49ers, the Santa Clara Stadium Authority, and its city celebrated the groundbreaking of Levi’s® Stadium, they reunited en masse to officially open their building.

After opening its doors for just a month, the 49ers Museum presented by Sony welcomed its 1,000th student into the Denise DeBartolo York Education Center.

After opening its doors just a month ago, the #49ersMuseum welcomed its 1,000th student. READ: http://t.co/p8AgHHDCJO pic.twitter.com/8U3oTTQd1e

49ers coaching legend George Seifert was inducted into the 49ers Hall of Fame and his statue unveiled at the 49ers Museum presented by Sony.

A Toyota Tundra truck was given away to a lucky fan during halftime for scanning their tickets using the Levi’s® Stadium mobile app. The season-long mobile app contest ended with the grand prize giveaway.